University College Cork are pleased to host Boole book launch:"New Light on George Boole" on 22nd November at 5.45 pm and all are welcome to attend.

George Boole's life (1815-1864) and academic career have been covered in a full-length biography by Desmond MacHale- "The Life and Work of George Boole, A Prelude to the Digital Age" (Boole Press 1985, reprinted by Cork University Press 2014). Now there is a totally new book full of exciting recently discovered information on Boole, detailing the human side of this great genius- "New Light on George Boole" by Desmond MacHale and Yvonne Cohen. It covers George Boole's family history and biography written by his sister MaryAnn, and his correspondence with close friends. Boole's rich family life is discussed too, as are his relationships with his pupils and students in both Lincoln and Cork.

His love of countryside and travels in the South of Ireland are vividly described in his letters, as are his reactions to the effects of the devastating Irish famine.

"A fuller more personal picture of George Boole emerges in this book - that of a loving son and brother; a generous lender and giver of money from his own meagre income to relatives, friends and those down on their luck; a romantic at heart; a lover of nature and the countryside; a musician and music lover; and a lonely exile in Ireland."

But by far the most controversial chapter in the book concerns the theory that Boole was the inspiration for Professor James Moriarty, the arch villain of the Sherlock Holmes stories. Convincing evidence for this theory is presented, and the other candidates are examined in detail.

He had an illustrious career here in Cork [Ireland], publishing in 1854 his great book: " An Investigation of the Laws of Thought" which laid the foundations of today's digital revolution.  In 1855, he married Mary Everest, a niece of the man after whom the world's highest mountain is named, and they produced five talented daughters, each famous in her own way. 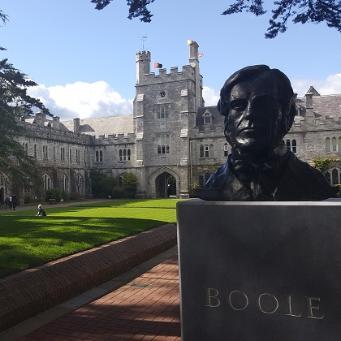 In attempting to understand how the human mind processes thought and uses Logic, Boole put his finger on the on the secret of mechanised thinking. This led to the digital computer which controls every aspect of our lives today.

One of the many highlights of this new book: "New Light on George Boole" is an eye-witness account of the meeting of Boole with Charles Babbage in London in 1862, where Babbage showed him the workings of his Difference Engine, a 19th century forerunner of the computer. If Boole had lived, maybe the two men could have put their talents together and the digital revolution could have come about a hundred years earlier than it did.

But in November 1864, still only 49, Boole walked to Queen's College Cork (now UCC) in the heavy Cork rain, and contracted pneumonia, from which he sadly died.

George Boole's death was controversial-some believe his wife may have inadvertently hastened it by her misguided belief in homeopathy and water cures. This is thoroughly discussed in “New Light on George Boole” and an eye-witness account of his last days is presented.

Your Invitation to Boole Book Launch

All are welcome to attend.