It has recently been announced that Prof Geoffrey Hinton (great-great grandson of George Boole) has won the Turing Award 2018 along with Yoshua Bengio and Yann LeCun - two other proponents of deep learning, a popular form of Artificial Intelligence (AI).  This achievement is great news for the field of artificial intelligence and, in particular, machine learning. The Turing Award is widely regarded as the ‘Nobel Prize in Computer Science’.

Such AI is increasingly used in products that people use every day - from smart speakers to Facebook. Deep learning is also seen as a promising, though not flawless, tool for the development of self-driving cars and other futuristic technologies.

As part of our George Boole 200 celebrations in University College Cork (UCC), Ireland, we were delighted to have Prof.  Hinton present at our George Boole Bicentenary Conference held in UCC at the end of August 2015. Title of his talk was: ‘The Real Laws of Thought’

A rare artefact which once belonged to George Boole is currently on display in UCC Boole Library and is kindly on loan from Prof Hinton. It is in the form of a silver ink-stand which was presented to George Boole by his friends in Lincoln, England in December 1849.   It consists of two ink-wells, a central pot for absorbent sand or powder, a small candle-holder and a tray to support them all.  The set was made by the firm of Henry Wilkinson and Sons, of Sheffield, England and dates back to 1848. 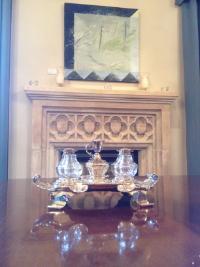 It can be seen on the ground floor of UCC Boole Library, thanks to the work of our recently deceased University Curator, Michael Holland (RIP).

In their new book, New Light on George Boole (published by Cork University Press 2018) Des MacHale and Yvonne Cohen give a fascinating insight into the many accomplishments of Prof. Geoffrey Hinton 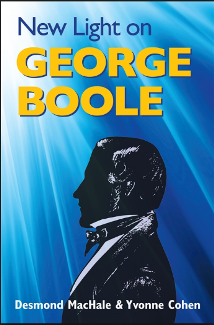 ‘Truly, by accident or design, he [Hinton] is walking in the footsteps of his famous ancestors’