Inside Story: How A Mathematical Genius Inspired A Gifted Blind Musician

George Boole (1815-1864) is often referred to today as: “a Forefather of the Information Age”.  However,it is not widely known that music was among his many talents.

In Gerry Kennedy’s newly published book, The Booles and The Hintons  (CUP), we learn the young  George liked to play the flute.[1]

His musical interest is further evidenced in a letter [2] from George to his sister Maryann on the 5th December 1850, from Queens College Cork (now UCC), when he mentions in a postscript that he bought a piano:

So, it was a fitting tribute to Boole’s memory when the university asked gifted music student, Robert Creed, to compose a piece of music for the George Boole bicentennial celebrations last year. The musical composition is entitled:

Robert Creed, like George Boole, is a true inspiration. Robert is visually impaired having lost sight in one eye at the age of two, and in his second eye, twice, at the age of 16. Despite the many challenges his visual impairment presents, Robert plays both the button accordion and tin whistle and has been writing music from an early age. Now 24, he is currently studying for a Masters in Music - Performance (Music) in UCC. 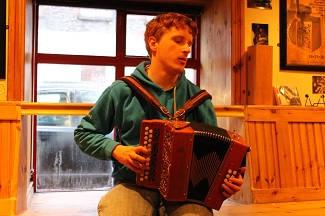 Today Robert (pictured above) meets Olivia Frawley, George Boole Digital Project Manager and reflects on what inspired him to compose such a beautiful piece of music.

OF: Great to meet you, Robert! Tell me a little bit about yourself.

RC: I am from Leixlip, Co. Kildare. I am part of a very musical family. My Dad, Brendan plays guitar and has always written his own songs and so has the oldest of my two brothers, Kevin. My mom, Emer, is a beautiful singer and her Dad, Tadhg O’Donovan, from Ballydehob had a wonderful tenor voice.

As a boy, I went to Primary School, known then as St Joseph’s School for the Visually Impaired in Drumchondra; it is now known as: ChildVision, National Education Centre for Blind Children. From day one, the teachers there put a huge emphasis on music particularly Catherine McGorman who taught me Irish traditional music and Maeve Smith my piano and music theory teacher. I can remember being in class with a boy, who, at the tender age of 8 was composing his own tunes. I never thought I could do that and I put it to the back of my mind. However, the idea of composing stayed with me for some time.

By the time I went to secondary school, I had a wonderful foundation in music. I had a moment, though, before the Leaving Cert, when I was feeling under extreme pressure. I decided to deal with it by putting that dark feeling into a tune. I had a prayer in mind and I called it God lightens the darkened path. That gave me the strength and belief to go forward. Combining my faith as a Christian and music has always been a transcendent influence in my life. In that tune I took comfort in knowing that even though life can be difficult and uncertain, God will always light my way if I put my trust in him.

Then I asked myself the question around the time I was doing my Leaving Cert: “is there life after Drumchondra?” My music teacher, Catherine McGorman, reassured me there was, lots of it! So I went to UCC.

OF:  I am curious to know, why you chose UCC?

RC: I have been here since 2011. It has been an incredible experience. I chose UCC because I wanted to do a degree where I could study mostly music and another subject. I wanted to do psychology and there was no other place at the time which would allow me to do music as a main subject and psychology as a minor one.

I also wanted was to learn more about Irish traditional music and I got that in abundance in UCC.

OF: What are you doing now?

RC: At the moment, I am doing a Masters of Arts in the performance of music in UCC. This course allows me to diversify into different genres of music.  My background is in Irish traditional music and, when we started off with hip-hop classes, it felt like I was jumping in at the deep end.  To my surprise, though, I am really enjoying it; it definitely is opening-up my eyes to new possibilities.

OF: What inspires and drives you?

I lost my vision twice in one year when I was 16 years old. It was a song by my favourite singerl, Jason Gray, called Nothing is Wasted  that helped me overcome that very difficult time.  For me, as a Christian, when terrible things happen, God can turn it into something beautiful. I love the idea that music is a non-visual art which straight-away puts me on a level playing field with everyone else.

However I actually have a condition called Synaesthesia which means: when I play music, I see colour not from my eyes but from the part of my brain that is responsible for vision. 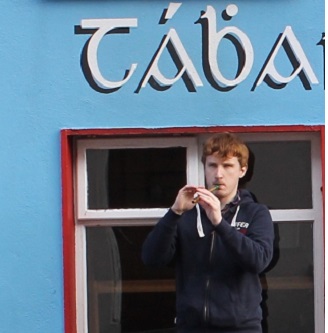 OF: How did you hear about Boole?

RC: In 2015, UCC celebrated the bicentenary of George Boole. In early 2015, I was approached by the university to compose a piece of music for these celebrations. I felt honoured but I had to find out more about him first. Inspiration came in the form of a poem written by George Boole.  Well, I suppose it is a prayer more than a poem really. It is called The Communion of Saints.

I got help from another student, Emily Pattison who was studying English in UCC at the time. Emily read out the poem for me.  We went through it, line by line, discussed and reflected on it. I tried to figure out how I could relate to it. After a while, I got it and decided that it had to be a slow air. That prayer isn’t talked about much. It needs to be remembered and that is why it is called George Boole’s Prayer Remembered.

OF: What was your best memory/best performance at George Boole 200 celebrations last year?

RC: It was a magnificent honour to have played George Boole’s Prayer Remembered at A Summer’s Evening at the Quad in July 2015.  Even before that, the rehearsals were major.  I was learning how professionals get ready for a concert.   I was in the middle of it all.  Everyone was so positive and supportive.  Their positivity helped me to go up and perform.  All the joy I experienced on the lead-up to it, enabled me to give it my all.  It was very special to have the honour of playing with Cork Youth Orchestra and the Celtic Tenors all of whom are hugely talented.  I felt fabulous!

OF: How do you do it all?  If I had your challenges I don’t know what I would do?  Do you have technology in your life?

RC: Technology is very helpful. Visually impaired people can be excellent with technology but I am not one of them. My thing is music. However, I can appreciate technology. If I did not have a computer that could talk, I would find it exceptionally difficult to do my degree. My mobile phone also talks. It is an old phone. Everyone complains and tell me that I need a new one. But if I didn’t have it, I wouldn’t be able to easily record tunes.

OF: How do you learn music?  Is it by touch or sound?

RC: The main way I learn it is by listening. Learning by ear is like doing mental gymnastics on a massive scale. I can read music in braille but I don’t learn from it.

OF: What would you like to be doing right now?

RC: I am actually trying to figure that out at the moment. So let’s pretend I get a choice and can do anything I want . . . part of it would be teaching Irish traditional music to all sorts of people but if that is all I did, I wouldn’t be entirely happy. I would truly love, if I could, to go to America and to join in with the Irish and with the Christian music scene there, and tour around playing at different churches.

OF: You mentioned your favourite singer, Jason Gray earlier, did you ever see him in concert?

RC: Yes and I actually met him in August last year. After the show, he spent time talking to me. I got to tell him about the song he wrote:  Nothing is Wasted, which helped me so much.

OF: Do you have a guilty pleasure?

OF: Did you know that George Boole featured on this year’s Junior Certificate Music Paper?

RC:  Wow!  I didn’t. That is amazing! Music is so good for your brain: parts of the brain are stimulated simultaneously. It is like your brain becomes a fireworks display.

Music is wonderful because it is so diverse. It can suit the visual and the non-visual.  It is utterly adaptable to your strengths and that is why I love it!

George Boole's Prayer Communion of Saints can be found in The Life and Work of George Boole*- A Prelude to the Digital Age, Desmond MacHale (pages 203 & 204)