‌This year, 2016, is the 100th anniversary of the death of George Boole's wife, Mary Everest Boole (1832-1916), niece of the Surveyor General of India, Sir George Everest, after whom the world’s highest mountain is called. The Booles were well-matched, as she was also unconventional, intelligent, and mathematical in her own right. 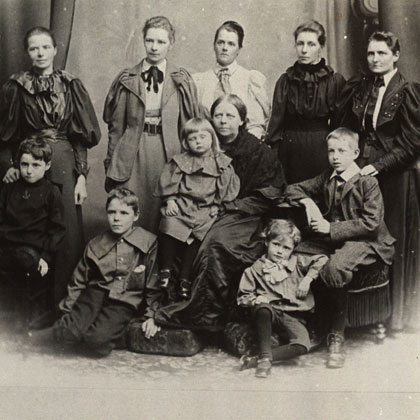 1 A letter has been uncovered (from the Boole Papers in the Boole library at UCC) written by Boole on 21 June, 1856 thanking  Dr John Bury, a Medical Doctor from Chester, England, for his advice during their first pregnancy. Issues contained in the letter included counsel against the common practice of corseting in Victorian times, the role of exercise in pregnancy, medicinal use in pregnancy and labour, the natural birthing process, and lactation of the newborn infant. We do not have a record of Dr Bury’s advice to Boole.

His joy and love come through as he writes just two days after the birth of Mary Ellen:

"I am now a father. My little first-born—a daughter—came into the world two days ago. It is a fine healthy child and its dear mother is wonderfully well."

He wrote that Mary Everest Boole also had to cope with conflicting advice from “experienced matrons” who frequently contradicted Dr Bury’s recommendations:

"She had the courage, in spite of perpetual forebodings of evil from experienced matrons to follow out your (Bury’s) advice implicitly."

Unlike most Victorian women, Mary Everest Boole, on the advice of Dr Bury, “ wore neither stays nor corsets nor compresses of any kind.” Boole adds.

Stays were the fully boned laced bodices and the term probably comes from the French “estayer” meaning “to support”. In pregnancy, corsets were designed to mask, even minimize, the size of the pregnant body.  George Boole was correct in not encouraging these supports since constant corseting, especially when began in late childhood, often caused weakening of wearer’s back and dependency on the corset due to muscle atrophy. Tight corseting also made it difficult to participate in exercise by reducing lung capacity, the next issue raised in Boole’s letter.

According to Boole, his young wife remained active throughout her pregnancy:

"I believe it to have been a consequence of this freedom (from corseting) that she was able to take an amount of exercise very unusual for persons in her situation up to the day of her confinement. Her step remained as light as ever and her motion was unimpeded."

Today, it is still considered most important to remain physically active during pregnancy. Exercise has significant benefits that are associated with improved pregnancy outcomes. Exercises involving balance, like biking or skiing, or contact sports can be risky during the latter trimester of pregnancy. In Victorian times, horse riding would have been the exercise most discouraged:

“the moment symptoms of pregnancy develop themselves she must instantly give it up, or it will very probably cause her to miscarry.” 2

When writing to Dr Bury, Boole very pointedly refers to his wife’s avoidance of medicinal products during pregnancy (and later in labour).

So, to what medicines could Boole have been referring in his letter to Bury? Today it may be hard to believe, but in early- and mid-Victorian times it was possible to walk into a chemist's shop and buy without prescription opium, cocaine, and even arsenic. The most popular opium derivative was laudanum, a tincture of opium mixed with wine or water. Laudanum, called the 'aspirin of the nineteenth century,' was widely used in Victorian households as a painkiller, recommended for a broad range of ailments including cough, diarrhoea, rheumatism, cardiac disease and even delirium tremens.3 Ultimately, the Dangerous Drugs Act of 1920 banned the use of these drugs.

Boole almost certainly was not present during Mary Boole’s labour. The doctor and midwife present at his wife’s confinement assured Boole that everything had gone as expected, even better than expected for a first time mother. Boole writes:

"Her suffering during labor was less than is generally experienced in a first confinement—nor was it really severe for more than an hour or two. The nurse tells me that she was never present at a more satisfactory case and the doctor confirms her judgement. When it was over, she seemed well, talked cheerfully during the evening and slept like an infant the whole night."