George Boole*: a Man More Than the Sum of his Parts

University College Cork’s first professor of mathematics, George Boole was much more than a mathematical genius. He was a child prodigy, a whistleblower, a linguist, a social reformer and a poet – and he may even have given fictional detective Sherlock Holmes a run for his money. Clodagh Finn introduces an unsung architect of the modern age.

To appreciate the extent of his influence, just look around. There would be no laptops, no smartphones or no computers without Boolean algebra. The operation of the stock exchange, the Lotto and the weather forecast all owe much to Boolean probability. If he were alive today, George Boole would certainly be a celebrity. The self-taught mathematical genius who made the digital age possible would be a household name, though he’d wince at the thought.

This exceptional gentleman, born 200 years ago this year, was shy and retiring. And yet, when he secured a post as the first professor of mathematics at Queen’s College Cork (as UCC was then known), he was not afraid to act as a whistleblower.

In 1856, he wrote to the Cork Daily Reporter to expose the college president’s administrative shortcomings because, as he put it, "it was no longer possible to remain a silent witness without a dereliction of public duty".

But the outburst and the controversy took a considerable toll. His wife Mary later recalled how he suffered terribly for days afterwards, "He had to be watched and tended like an invalid so great was the nervous strain," she wrote. In general, however, George Boole was a man who did not court controversy. In the words of his biographer, Professor Desmond MacHale, "He was very careful not to express his views on social issues, education or religion." He let his actions and his work speak for him instead. 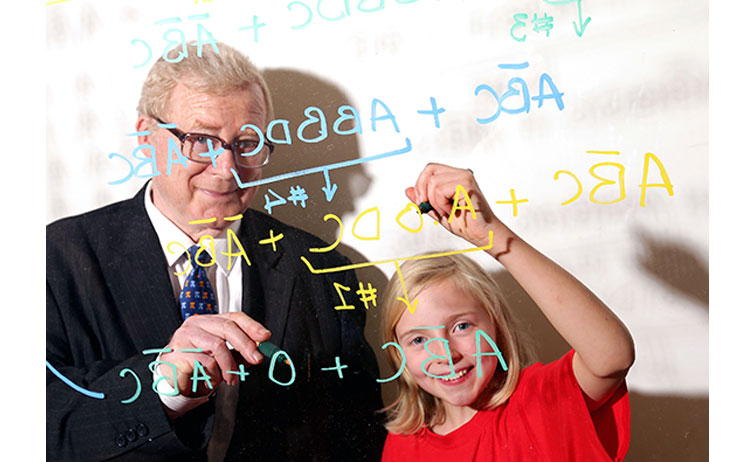 Professor Des MacHale and Liadán Garner sum it up at the launch of George Boole 200.

"He would become the giant upon whose shoulders other modern thinkers and scientists could stand."

This year, as UCC celebrates the bicentenary of his birth, his pioneering work will take centre stage. He was the first to devise a mathematical language for logic, a breakthrough that would facilitate the design of high-speed computers.

He would become the giant upon whose shoulders other modern thinkers and scientists could stand. As Emeritus Professor of Mathematics Ian Stewart says, "He was one of the great intellectual pillars that support our modern world."

But there was much more to George Boole than his mathematical genius. He was a fascinating and multi-faceted man who showed signs of brilliance from a very early age.

He was the first child born to struggling shoemaker John Boole and his wife Mary Ann, a lady’s maid, on 2 November, 1815, in Lincoln, England. His father had a passion for science rather than shoemaking and he and his son spent many hours together building microscopes, kaleidoscopes and telescopes.

His father was so proud of their telescope that he pinned a notice in the shoemaker’s shop window inviting the curious to take a look: "Anyone who wishes to observe the works of God in a spirit of reverence is invited to come and look through my telescope."

His son, meanwhile, was passing out his teachers at school. A fellow primary school pupil remarked, "This George Boole was a sort of prodigy among us and we looked upon him as a star of great magnitude."

He taught himself Latin, Greek, French, German, Italian, mechanics, astronomy, not to mention applied and pure mathematics. However, at age 16 he was forced to leave school to help support the family after his father’s business collapsed.

George was deeply religious and would remain so for the rest of his life, but he was forced to abandon his hopes of a church career to become an assistant teacher instead.

In 1840, he went on to open his own school – a Boarding School for Young Gentlemen – and would later start to make a name for himself writing ground-breaking papers on mathematics.

He had no secondary or third-level education, yet he still applied for a professorship at Queen’s College Cork in 1846.

"He looked, not like a professor writing a demonstration on a blackboard, but like an artist painting from a vision."

The college made a bold step in appointing him, but he came with the testimonials of other leading mathematicians and he had a Royal Society gold medal for mathematics.

His arrival in Cork was delayed, due partly to the Famine, and when he got there in 1849 he found it a strange place. He wrote of being shocked by "the cry of the helpless little ones" in a country still suffering severe hardship after the Famine, though he seemed indifferent to their parents, or at least unable to understand their plight.

He was lonely at first and would go from church to church to hear different sermons. Yet in a letter he wrote to William Thomson (later Lord Kelvin) in 1850, he sounds content and fulfilled: "I can say with perfect truth that I feel a daily increasing delight in my duties."

His students, too, were impressed by their brilliant professor. "He looked, not like a professor writing a demonstration on a blackboard, but like an artist painting from a vision," one student said of him. His particular vision was to express the workings of the human mind in symbolic form. His two books on the subject, The Mathematical Analysis of Logic (1847) and An Investigation of the Laws of Thought (1854) form the basis of today’s computer science and electronic circuitry. 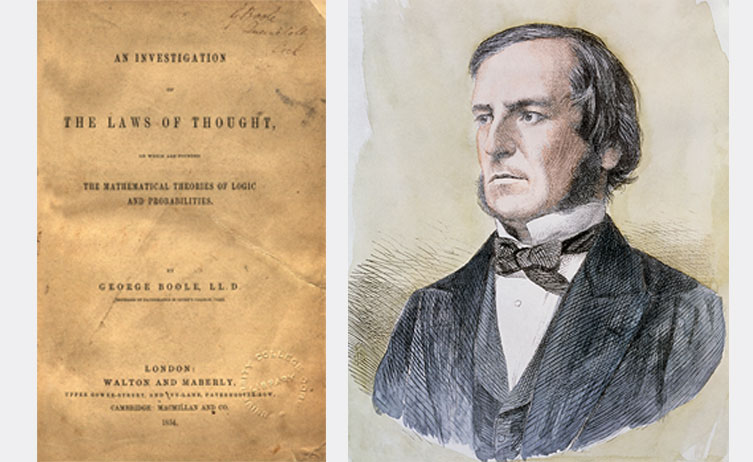 During his time at 5, Grenville Place, Cork, George Boole wrote his masterpiece An Investigation of the Laws of Thought (1854) centred around his theory of logic and probabilities.

In 1855, he married Mary Everest, whose famous uncle Sir George Everest gave his name to the world’s highest mountain. He was 40 and she was just 23, yet they had a very happy marriage and had five daughters, Mary Ellen, Margaret, Alicia, Lucy and Ethel Lilian. Boole was a devoted father and loved children. He played games, told stories and his favourite role was playing "a good lion that could roar well".

All of his children would make their mark on the world and three of them went on to be famous in their own right: Alicia followed in his footsteps and became a mathematician; Lucy became a professor of chemistry and Ethel wrote many novels, including The Gadfly. His wife would later look back on their marriage and say that it seemed "like the remembrance of a sunny dream".

It lasted just nine years. George Boole died suddenly in 1864 after catching a fever while walking to college through driving rain one December morning. He gave a lecture in wet clothes and died just two weeks later, aged 49.

George Boole was largely forgotten until a fellow professor of mathematics, Desmond (Des) MacHale, came across his letters in 1972. Since then, Des has succeeded in bringing the man, his life and his work back to life in vivid detail in his biography The Life and Work of George Boole: A Prelude to the Digital Age (Cork University Press, 2014).

Des believes Boole somehow sensed the digital revolution that was coming. He thought machines should be used to leave “human souls” free for more leisure and intellectual activities.

"He would be thrilled to see how far we have come, but I think a bit shocked to see how the internet has developed," he says. He might have been a little taken aback, too, to hear that Sherlock Holmes creator Arthur Conan Doyle later turned him into the great detective’s nemesis. Des believes there is compelling evidence to show that criminal mastermind Professor Moriarty was a dark version of George Boole. "It was a sort of backhanded tribute, but like Boole, Moriarty was a professor of mathematics at a provincial university," he says.

Professor Desmond MacHale’s seminal biography The Life and Work of George Boole: A Prelude to the Digital Age is available from all good bookshops or directly from Cork University Press, priced €19.95

If you place your order online at Cork University Press, you can avail of a 20% discount. Simply quote BOOLE (in capitals) in the promotional code box.