Imagining Something is the First Step to Making it Happen

Alyssa Hinton is an art professor and art educator who also happens to be the great-great-granddaughter of George Boole. Having earned her B.F.A. from Tyler School of Art in Philadelphia and her MA in Art and Design from North Carolina State University, she is now an internationally recognised mixed media artist and art educator in the United States. In 2002, she developed a freelance curriculum entitled Art for Life that specialised in contextual learning solutions for troubled youth. She later adapted this programme for various art residencies, including an IBM Enterprise Learning workshop applied to business planning and leadership styles.

Today, she has kindly agreed to give a rare interview about her work, her life and her interests.

Desmond MacHale, in his book The Life Work of George Boole stated:

"George Boole was a mystic genius, whose ideas have utterly transformed the world in which we live. Computers, information storage and retrieval systems, electronic circuits and almost the entire world of present-day technology depend vitally on the simple but ingenious mathematics he invented - Boolean Algebra." …then he goes on to say;

"Perhaps some day his ideas will help us to unite and reconcile body and mind, art and science, logic and psychology, and maybe even man and god."

‌This strikes me as interesting because in my life and art I am attempting to fully reconcile the very different family backgrounds that make me who I am (legacies that seem oppositional within society at times).  Both the Medicine Wheel (the universe) and the Thunderbird (electric creator of the universe) from which it springs, deal with the concept of duality.The Thunderbird from the upperworld was the messenger of the Great Sun, a mythical bird that kept monsters of the underworld in check, creating, not only dual opposition but balance in world order. 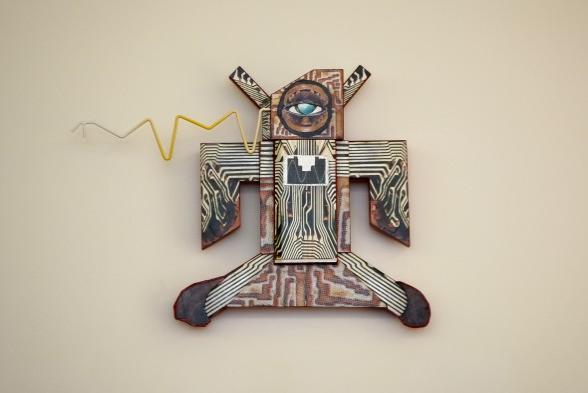 The upperworld (where the Thunderbird comes from) and the underworld would be the 5th and 6th direction.  The realms of the upperworld and the underworld are connected by a vertical “pole” known as the Axis Mundi, equivalent to the universal Tree of Life concept. Its customary lightning bolt, is the quintessential Native American icon. It tells of the original creation of the universe through electricity (life energy). Here I symbolized its creative electrical force by using circuit board and copper coil imagery. I took it upon myself to update the Thunderbird in this fashion and used it as a way to illustrate the power of this mythical being while demonstrating Indigenous survival and continued cultural identification in the digital era. This contemporary high-tech bird represents a balanced amalgamation of ancient knowledge and illustrates how this is united and reconciled with modern technology. In addition to the Thunderbird, there are 10 more iconic sculptures in this series, and each have their place on the wheel. 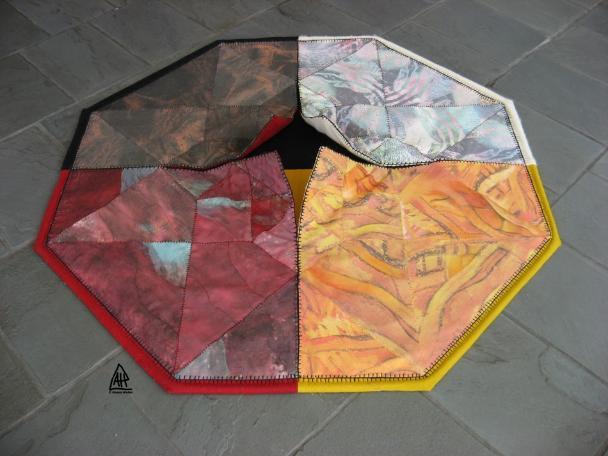 The medicine wheel is a symbol for the relatedness of all things. The wheel centre, where the four directions meet, represents the centre of the cosmos.

The wheel centre also incorporates duality. For example, I’ve shown in the very centre of the wheel, the duality of day and night, which is represented by the opposing yellow and black felt halves. The red and white under the central flaps symbolizes all manner of duality . . . i.e. good-bad, pure-impure, order-disorder, chaos-harmony, war-peace etc . . .

The surface of the octagon has a tesseract stitched into it. This was pioneered by my great-grandfather, Charles Hinton, son-in- law of George Boole. The tesseract is a geometric form showing eight overlapping cubes. It represents the fourth dimension. This is known in quantum physics as space-time. 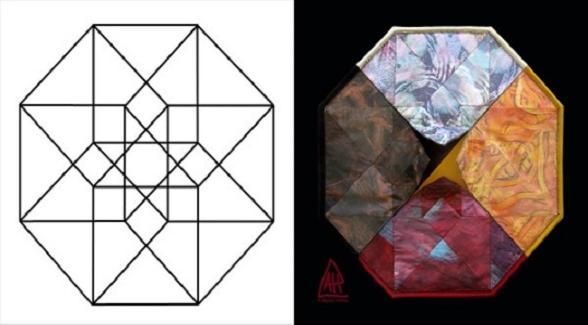 By including the tesseract design within the wheel I am suggesting a link between modern physics and the “relatedness” philosophy of the medicine wheel where everything is balanced, integrated and unified.

Alyssa has conducted college level workshops at the University of Colorado at Fort Collins, The University of North Carolina at Pembroke and at Roxboro Community College, Roxboro, NC.

In 2015, having studied art in China over 30 years ago, she was invited as artist in residence to The China Academy of Art in Hang Zhou, China.

“Imagining something is the first step towards making it happen. Education of the imagination can happen by encouraging an expansive thought process through the free association of ideas, allowing for the maximum amount of non-structure and divergence to exist within the framework of a clear structure. Within this balanced paradigm mistakes can readily become opportunities, altering definitions of success and perfection.”   Alyssa Hinton