Another Boole in the Making?

Congratulations to Antanas Murelis from Synge Street School in Dublin who won the inaugural 'UCC Boole Award for Excellence in Mathematics' at the BT Young  Scientist & Technology Exhibition (BTYS).

His award-winning research was in 'Pricing Parisian Options Using Monte Carlo Simulation'. Antanas also won the Senior Individual prize in the chemical, physical and mathematical sciences category in the main awards ceremony. Synge Street has a great track record of winning prizes at the BTYS. The UCC Boole Award for Excellence in Mathematics was supported by Arup. Learn more about the 2016 special awards here.

The BT Young Scientist & Technology Exhibition takes place at the RDS during the first week of every January. It is an incredible inspiration to see bright young minds imagining the future. While you wait for next year, your child or niece or nephew may be interested in joining a nearby Coder Dojo or the well-regarded Munster Programming Training in the Computer Science department University College Cork. 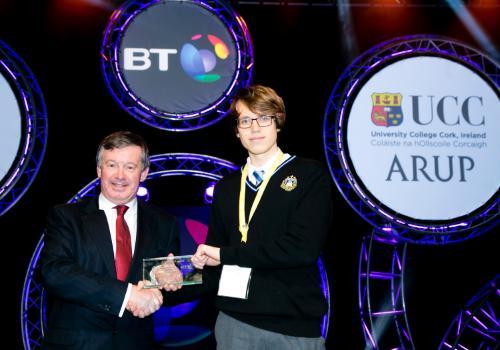